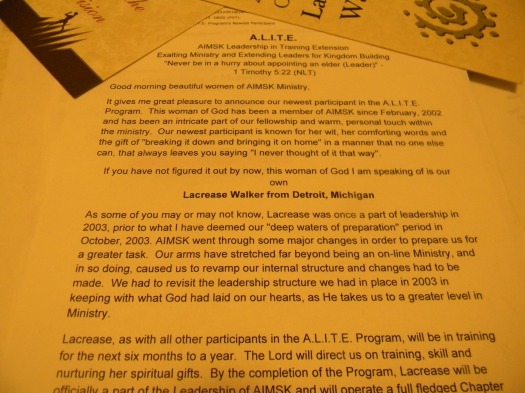 ~continue~I was tripping on how much fun I had being up in the air. Since then I have been on a plane a total of 8 times. My fear of fly is over.

Angela and Vanessa our co-leader taught us so much. I wish I knew and believed those things they were teaching us. I couldn’t comprehend it. I didn’t know anything about Leading, I wasnt popular in school, I hadn’t done a thing to make them see  what they saw. They knew it, and again when it came down to the workshops and exercises, I kept everything, because for some reason I had a feeling that I would  someday comprehend everything that they taught. One of the 4 nights we were in Chicago, and we had a day at the spa ( full body) we got in bed, and about 3 something in the morning, they BARGED in our  hotel rooms told us to SHUT UP, don’t talk, and to put on these army uniforms that they had given us with our names on it, and after we did it we were to line up outside of our rooms and not say a word. We all were looking like WTH!!!!!!!!!!!? But we were too scared to talk, we knew they weren’t going to hurt us, that NEVER came to mind, we just didn’t know what to expect. After we lined up, they had us walk a straight line outside, we had to do these exercises. One was, someone had to stand on top of the ladder, and after she fell forward we had to catch her and not let her hit the ground. OMG we were so nervous, and cold. We had just gotten out of the shower and then out into the air. We were so sleepy and so outdone, we didn’t understand why this was happening. WE dropped someone OMG, and boy were we in trouble, LOL She/they taught us that we are 1, and if 1 fall, WE ALL FALL. It was a really good lesson to learn. I have applied this same exercise to my Raisingurl group. I’m going to be honest. I didn’t understand and HATED doing that exercise… but I got the meaning of it. SHM right now, IM SO GRATEFUL they taught us that. I have 4 groups and it has really taught me discipline. She was raising us up and we didn’t even know it. One night while we were in New Jersey, she told us to put on these uniforms, we had to carry 2 jugs of water in a back pack on our backs, and hold an egg. They lead us out of the apartment ( Queen Latifah stayed there too) and into the subways, we were told that we couldn’t drop the egg, and that if someone was getting tired of holding the egg, that we as a group need to help them and carry if for them until they regained their strenght to make it to the finish line. Of course I was one of the bigger gurls and a Sista was TIIIIIIED. I cracked my egg, my legs were so sore and tired. WE all were tired because we never knew when the walk through New York and New Jersey was going to end. LOL We caught so many trains, people were looking and staring at us, at some point we didn’t care, all we wanted to do was get back to the hotel and sleep. We talked all through the night, through  Times Square, it was about 8 of us total. We walked about 4-6 hours. Chick was tied!!! They made us walk THE BROOKLYN BRIDGE, YEP I WALKED THE WHOLE BRIDGE!!!! I didn’t know if I should quit and leave, plus go home, or listen to “you can make it La’Crease” from everybody.  And to this day. I LOVE WALKING. LOVE IT! LOVE IT. LOVE IT!!! When we got back to the apartment, we stretched out, nobody talked, we were tired!!! We learned so much, she talked, we sang songs, we cried, laughed. Then the next day, she took us shopping in New York. The pain was gone, I bought so many purses, my suitcase was heavy. I will never forget all the things they taught us.

I remember one day while in New Jersey, we were in Church, and I sat next to Angela, when it held hands, I could feel the anointing in her hands. I will never in my life forget that as long as I live . The power of God went through her hands and I felt it. It was very powerful, out of all the people hands I hold in Church I never felt an anointing like that. That told me a lot about her. She was so good to us, I really feel bad about the things that went down, and also how it was time for her to move on from AIMSK.  I wish I had done more assignments, did all the things she asked me to do without fear of failing to do the task the way she asked. I wish that I took Ministry more seriously than I did. I wish I had really understood the workshops she held to ask the right questions. But you know she did what God told her to do, she planted the seed.  Had I known the person that I  would be today, I would have done more to listen, to understand, to learn. She and Smokie Norful are very good friends, they belong to the same Church, but when he got his own Church, he asked her to come with him and she and her husband did, and I never got a chance to see her preach there on some of the days he had to be away. I miss her. She taught us so much to go on with our lives. Tomorrow, I’m going to share some of the things she taught us and how it has helped me to become the woman  I am today. ~to be continued~