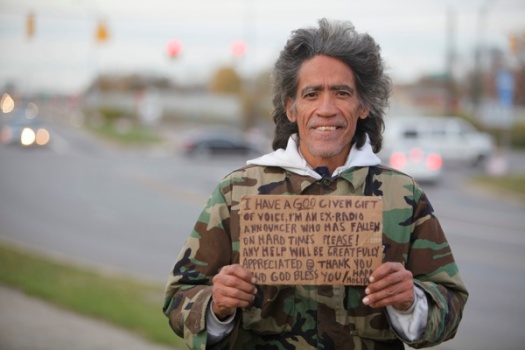 Hey,
Before I go any further, make sure you check out the previous blog entry…. God talks to La’Crease. Where do I begin? So much has happened, good and spooky. Well, let me start off with Ted Williams!!! My new hero. When I tell you that I cried when I saw this man’s story……please believe me. I cried like a baby. I admire, Love and adore this man. I Thanked God so much for his break thru and I prayed even more for God to station good people in his life to help him and not harm him. I prayed that God watches over him, and make sure that he doesn’t relapse from all the sudden fame. I’m sure it can be very over whelming at times. He said that before he didn’t have God in his life, he didn’t Praise him, didn’t acknowledge him at all, he said this time is different. He has God in his life and this time he is Thanking him for everything. His mother is 90 years old and looks good!!! I’m so glad that God granted him his wish for them to see each other, and she sees all the attention and offers that he is receiving. But I will say this….. his mother is a STRAIGHT UP MOMMA!!! LOL She don’t mind the cameras and fame, but she let him know in so many words, you have done this before ,and that you can only SHOW me you are serious this time. She didn’t care about cameras following them around or the endorsements. She wants her son to get his life together and stay that way. When she passes on, she wants to know that he is on his feet and is stable. I love that about her, at first I was like dang………she sure is acting “funny”, but see she knows her son, we don’t. She has seen him up and down, and before she eats any “cake and ice cream” she wants to be perfectly sure that he is going to be just fine. I’m so proud of him. I feel like one of my Homeless friends made it! Yes!!!
Last week as I was ringing up customers, the guy who raped me when I was 17 walked up to me and spoke. I said hello to him, and he asked me how was my mom and dad. He was humbled, I didn’t act funny or anything. When he was done shopping, he got in my line. I planned how I was going to say to him ” do you remember raping me”? I wanted to ask him this so badly, his wife ( a old friend of ours)  was with him but she was still in the store shopping. My line was long, after a while I looked back and he was in another line. Maybe it wasn’t meant for me to ask him. I dunno if I could’ve said it once we were face to face, but I felt like I could. Of course I would have said it low, but then again it wasn’t the right time. Its just something that “I wanted to ask”. I love God, because he always told me that I would see him in Walmart. He prepared me for this. Both times I saw him, it was there. How “father-daughter” is that? I know that I want to ask him this question, its not like he’s a stranger he knows my whole family and I know his. Its a question that I really really want to know. Even if he can’t answer it, at least I will put it in the front of his thoughts.
Everyday I’m thinking about moving to Atlanta!!! Oh my God its on my mind so deep. I know that I will become a residence, its just a matter of when God is going to release me from this city. I’ve  been wanting to live there since Neisha was at least 4 , 20 years ago. I feel like a foreigner in another country there. I want to drive around the state and get to know new places. That’s what excites me the most, getting to know Georgia for myself. And its funny because I have no desire to go any place else and do that. I knew that Georgia would be my home 20 years ago, I don’t know what work is there for me, but its coming. I’ve been doing what God told me to do, and whenever he say its time to move, I will be making that move. The last time I was there, I found a nice place to stay. I know a lot about Buckhead, Sandy Springs,  and Dunwoody. I love to drive, so when I was there in June, that’s all I did ALL DAY. I wore my momma out, she said take me back to the hotel. LOL We did, and soon as she got in the room, me and Neisha took off for the beautiful night life downtown Peachtree. I even found me a Krispy Kreme donut house. LOL
May 1, is when My Raisingurls meetings start back up!!! So many parents have asked if their daughters can be apart. I do have a limit and I have to make sure everything runs smoothly. I’m really looking forward to seeing the gurls and meeting new ones. So much to plan, so much to discuss, so much to learn, so much to do.
Its that time again to feed the HOMELESS and pass out Valentines Care Packages!!! If you are reading this and would like to donate, my pay pal email address is neshacrese@aol.com . Thank you!
Well, Im closing for now, gotta post one of my teachings in the next blog entry.
Cree ~ New level~