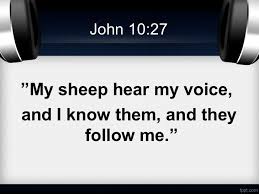 I hear God by KNOWING that the words spoken in my mind/soul/heart are NOT words I would say myself.

The best way for me to explain this is by stories of my Life Lessons.

One day I was at the red light, on the over pass, on my way to work, when I heard God say.. LaCrease pray RIGHT NOW as if today was your last day living. He said PRAY NOW. At first I thought I was tripping, because it was with urgency and he said before the light turn green. I remember saying.. God right now? He said pray NOW. I remember saying Lord Thank you for my life, my family that you hand picked for me. Forgive me for all my Sins, known and unknown. I told him that I wanted to LIVE with him forever. Then….. the light turned green and I was about to enter I-94. As I was driving, I’m thinking okay what is God up too, what is going on? He knows I ask a lot of questions and think a lot. I’m wondering if I was about to die, I didn’t know what was happening, but I PRAYED just as he told me.

I’m driving and JUST LIKE THAT… I started thinking about something else, and forgot all about the prayer I just prayed.

Just as I turned the radio on, and continued to drive to work.. all I saw was BRIGHT RED LIGHTS in front of me. People were breaking hard in front of me. I didn’t know what was going on to cause this all of a sudden STOP. The truck in front of me was blocking my view so I had to rely on him when to stop breaking. All of a sudden, he swerved over to the left, and that’s when I was able to see what he was seeing. When he swerved over I was RIGHT THERE about to run in the back of another TRUCK/SUV HARD!!!! When I say HARD… There was NO WAY in this world I would have survived that accident.  NO WAY!!!! I WAS DEAD!!! The truck that swerved over to the left  allowed me to see that HE was about to run into the back of another SUV truck. Once I saw what he saw, not only was I BREAKING REALLY HARD.. but I didn’t have enough time to stop, so I to had to swerve to the left.. THANK GOD NO OTHER CAR WAS THERE.

I would have DIED.. The impact would have crushed the front end of my car so badly, that it would have blew my chest out. It gave me a headache so badly. It never went away that day. My breaks took a beating too. LOL I went to work feeling so Thankful, I couldn’t stop thinking about God and HOW I HEARD HIS VOICE. This is one of the many stories I share with people all the time. You have to tune into that still voice.

Less than one week after Michelle Rowling, 25, of East Saint Louis, posted a cryptic Facebook status alluding to her death, she was found fatally stabbed in her apartment and her newly paroled ex-boyfriend, Montrell Cooper, 25,  has been arrested in connection with the crime, reports The Belleville News Democrat.

“So, if anything happens to me tonight just let my kids know I loved them dearly and tell my momma I love her,”  Rowling posted on Nov. 25 at 9:49 p.m.

On Dec. 1, East Saint Louis police responded to a disturbance call at approximately 9:00 p.m. and discovered the young mother of two stabbed several times on the floor of her apartment, reports KSDK.com.

She was rushed to a local hospital where she was pronounced dead on arrival.

In response to concerned friends commenting on her Facebook status, Rowling would share no details other than she had received horrible news. That news was that Cooper had been released from jail where he had been serving time since assaulting Rowling in August, said St. Clair County State’s AttorneyBrendan Kelly.

“From what I understand from others in jail with him that was his word, he was going to kill her,” said Rowling’s grandmother Diane Simmons.

The August incident was not Cooper’s first time assaulting Rowling.

In 2012, he served a year in jail for stabbing her in the neck; upon his release, he assaulted her again.

Rowling testified on Cooper’s behalf in the 2012 incident, so he received probation. In a court appearance on Monday, Cooper was released again after Rowling allegedly refused to testify against him.

“We often move forward with charges even when victims are not cooperative, hoping that if they see us standing up for them, they will stand up for themselves,” said Kelly, who had pushed for prison time in both incidents. ”The victim in this case actually testified in favor of the defendant.”

Cooper, who had been on the run in a Black SUV that was later found abandoned, turned himself in to East Saint Louis police Tuesday night and is being held on $200,000 bond.

He has not been charged and is being held on a probation violation.

“We want to question him about the stabbing death of Michelle Rowling,” East St. Louis Police ChiefMichael Floore said.

A candlelight vigil was held on Sunday night for Rowling.

“I don’t know which way to turn,” said her mother Cathy McGloson.

Rowling’s cousin, Danielle Lane, said that Cooper was always “quiet” around their family.  When she spoke to Rowling on Thanksgiving Day she said that she was trying to leave him for good.

“She was happy, but she looked worried,” Lane said. “She told me about the domestic abuse with him. She wanted to be with him, but they weren’t getting along, so she was trying to leave him,” Lane said.

“I didn’t see her for about three weeks. When I saw her, I told her she needed to get out of that relationship because that wasn’t love. I tried to get her to meet up with me and do some things, but she wouldn’t,” Lane said.

“We need to put a stop to women being abused. No matter what your family or friends say or think, speak out. There is always help out there,” Lane said.

Rowling and Cooper have a 5-year-old daughter together, reports CBS News.

According to a recent report by the The Violence Policy Center (VPC) in Washington, D.C. Black women are about three times more likely to die at the hands of a current or ex-boyfriend than members of other races.

I went to see Gone Girl yesterday with my mom and my daughter. The movie was very good, kept me into it…. but the end.. left me irritated and EMPTY.

When I watch a movie… I like to get into the mind of the writer. I like to figure out his mind frame as I watch. But this movie had me all over the place…. and I liked that in the beginning. I never read the book….I’m still mad about the ending. The show was jammed packed… couldn’t find a seat for two. When the lights came up all we heard was booooo. Thats the only word that came to our minds. I said it to boooooooooooooooooo! I felt like I went on a trip with the writer.. and got played.

To me… it seems as if the writer was doing good with the direction of the movie, then got lazy. Like his idea went out the door for the ending. It felt like he just did any ole thang to end the story. The gurl was crazy… no way should it had ended that way. NO WAY!!! Aint nobody living that life… in REAL LIFE.

Excuse me….. I may be a little irritated about the DETROIT LIONS losing today. Maybe I should have written this later on when I calm down. I doubt if it will change how I feel about the writing. Ben, Tyler and the sister did well in the delivery of the movie… but I’m PISSED OFF AT THE WRITER. (((rolls eyes real hard and opens them 40 minutes later)))