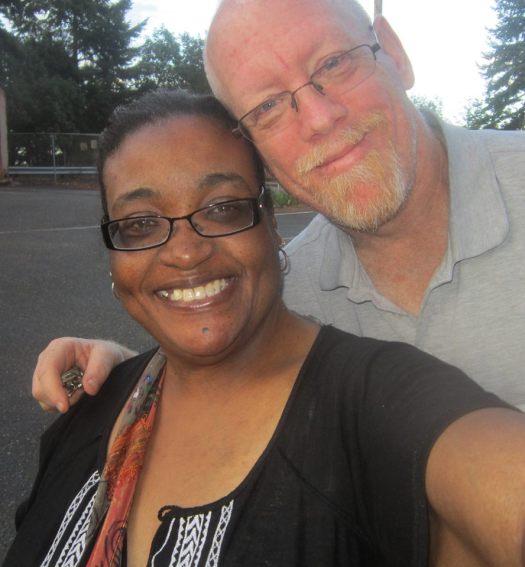 Hubby and I went to Olive Garden to have dinner..as we were sitting there waiting to be seated this little girl came and sit down beside us. I would say she was about 7 years old. She kept looking and then she was staring..I smiled at her and she smiles back. Then she said, ” Do you both live together?” I said, ” yes, We are married” So she kept staring and then I said, ” Have you ever seen a black and white couple together?’ She shook her head no. Then she said, ” Do you have any kids together?” I said,” No, but he was married before me and he had a wife, she died and went to heaven and they had kids, and now their kids have small children so we are grandparents.” She said, ” Why couldn’t you have any kids together.” I said, ” We got to old!” I smiled and she started laughing..I continued talking to her and I said,” So that’s ok right?” She shook her head yes and smiled.Then I asked her, ” Do you have any black friends at school?” She said ” No. I don’t have any.’ I asked what school did she got to. She told she is at a new school this year and she was telling me about her old school. So she just kept smiling at me and staring at me. I asked her , ‘What’s your name?” She said, ” Riley.” I said ” nice to meet you Riley, I’m Cynthia and his name is John.” She got up and stood up and looked up at John smiling and looked back at me smiling..So next to us where her parents, as I thought they were her parents , come to find out it was her adopted grandparents..and I told them our conversation and the grandmother said Both girls had been not around alot of people..but I did commended to the grandmother, that she was very polite and was very curious..she spoke so pleasant and she was very friendly. The grandfather looked a little unpleasant at first when I began telling the story and I think he thought I was going to be upset and then when the grandmother and I started laughing and smiling about it..John and I saw he was a little bit more relaxed and he started smiling bigger as I continue telling what this little girl asked John and I . I told the grandmother, despite her not being around any Black people..I felt like she wanted to learn and this is a step towards learning and getting to know other people from different races..She smiled and said ” Thank you for being so nice to her.” I told her, ” I really enjoyed my conversation with Riley and I hope she has learned something from our short conversation.” I told the grandmother, ” Thank you for helping to raise such a smart and polite little child.” I said to Riley as she was sitting down, ” I’m your first Black friend.” She smiled really big. Her grandmother told her, ” Riley, you met your first Black friend tonight.” She nodded her head and smiled. We said our good byes and Riley waved at me as we were called to our seating. I know some people would find it uncomfortable with the lady saying that but I didn’t..maybe it opened up something to them they had not ever had to approach. I don’t know.

I hope Riley spreads her love for people her whole life and I hope she helps someone else understand that we may all be of different race but we are all the same through and through.

As I sit here and type this, I have this warm fuzzy feeling in my heart and I’m a bit choked up with tears..I hope Riley has a happy life and embrace everyone no matter what color skin they have. I’m so happy that I was the first Black person that touched her life as I may never see her again. But I will always remember that sweet little face of hers. — feeling wonderful.