January 10 I lost my best friend to a highway trucking accident. There was a waste spill on I-75. His truck slid in it and caused him to slam into another truck killing him. He died doing what he loved doing.

My sister called me that evening waking me up out of my sleep asking have I been on facebook and that there are post saying that Rodney passed away. I jumped up from my sleep, got an instant headache and logged on. I was devastated.

I became depressed and laid in bed every chance I GOT. I couldn’t cry for the first 3 days because it didn’t  seem real to me. I thought about him all during the day and night. Seem like forever till the funeral which made me more depressed. My daughter knew it. She would call or text me just to hear my voice. Many times I would pretend to be fine, but I wasn’t.

Days after the funeral was over, I was lying in bed taking a nap deeply depressed when my daughter called she said “momma are you sleep?”  She said why didn’t you tell me that Tyler Perry tickets in Atlanta were on sale? I said I forgot, plus we have 2 tickets (( nights)) for the Detroit shows anyway. She said but still we’ll be in Atlanta for the baby shower, and I wanted to go because it was his last show. She sensed in my voice that I didn’t want to go. I just wanted to sleep. She told me that she was online with ticket master and only had a few minutes for those tickets and they we going to throw them out. She said momma do you want to go? I said no, I’m okay. She said are you sure? At that point I didn’t even want to go to Atlanta in May. She asked me again, momma we only have a few minutes to get this good seats do you want to go? I said No. Just then I heard God say, you should go, by that time you’ll feel better. He said you wont feel as depressed as you do today. He said if you don’t go, you’ll be mad at yourself later. I felt that! Just as she was about to click off Ticketmaster, I said yes get them. I remember getting off the phone from her feeling more depressed. It forced me to have to “get in the mood” for this trip, because I absolutely adore Tyler Perry and his work. This forced me to get out of my funk and get myself together.

As the weeks passed I started feeling better about my BFF and  learning that it’s Okay to cry, and feel some kinda way, but laying in the bed was not going to do it. My daughter wouldn’t allow it anyway. I started booking our hotel, truck, and also found some cool things to do for the 6 days we were going to be there.

I  requested 10 days off from work and we were outta here!! I love to drive and drove 12 hours there, and 12 back. My daughter can hang, she stayed up with me going and coming. 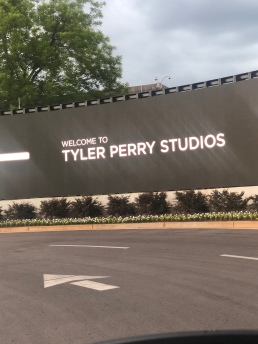 We stayed in 2 different hotels. The first hotel was very nice, one we tried to get in before but was all booked up. It was as lovely as we knew it to be. The other hotel was across from the Fox. We always imagined leaving out of our hotel room and walking directly across the street without having to worry about parking and traffic. WE DID IT!! Yazzzzzzzz!

The second hotel was the Indigo. It was expensive, and not what I expected. It was beautiful, but since its the very first hotel of its kind, they were not allowed to upgrade as far as the bathrooms. It was tiny. But it was clean, neat and in the location we needed it to be.

We had plans to leave our room at 7:00 and we did. The show started at 7:30 sharp! Listen, when this play was in Detroit, they received much love, but when the show started there, it was a different applause . They absolutely love David and Tamela Mann, as if they were from Atlanta. But when Tyler came out, those people went bananas. It was a different kinda love. Maybe I’m not explaining it right, but the atmosphere and the Spirit of the place was so LIT! TYLER HAD TO MAKE US SIT DOWN, before he even started his part. It was amazing experiencing this for myself. Even though I had seen the play 2 times before, it felt good being there as if it was my first.

David and Tamela Mann posted a video of their grand kids car that was involved in I a car accident days before, and I knew she was going to let loose on this last day. I knew it. They all survived. I look at that footage and know it was ONLY GOD who bought them all out alive and well. Yes, it was that bad. When she sung her first song, she was gone in the Spirit. We went with her. Some people may not have understood what made her go there like that, but we knew. I cried, and cried, and cried, and cried and cried and CRIED!!! I think everybody cried in that place.

Tyler loves to have music during his plays, and since Monica is from Atlanta, she was there to sing a verse of her song for us. It was amazing to see her. She sat directly in the row in front of us, along with “Benny” from The Haves and Have Nots. I kept looking at him because he was so “beautiful” never knew who he was. So when the show was over as we were walking across the street to our hotel, I saw him again and said……. Benny, he somehow heard, turned around, laughed to his friends and said…. she called me Benny. LOL That was so funny. 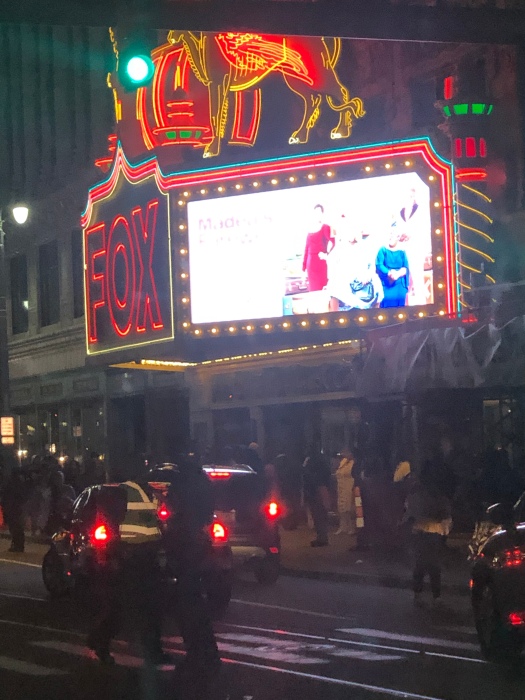 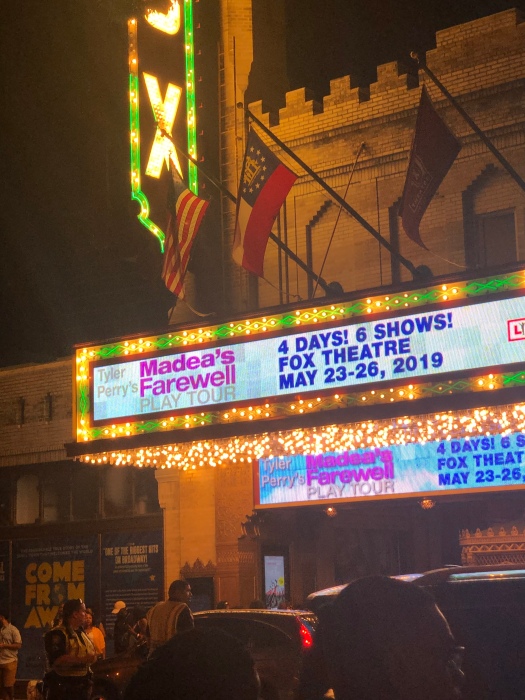 The play itself was funny and loaded with lots of messages. In Detroit, I got a program book, but I wanted a shirt and other things. But the line was so long. OMGG!! Hopefully I can order online.

I hate to see Tyler leaving the stage. but I guess he’s really tired of playing Madea, and that’s okay too. I’m so glad God told me to go, THANK YOU LORD.