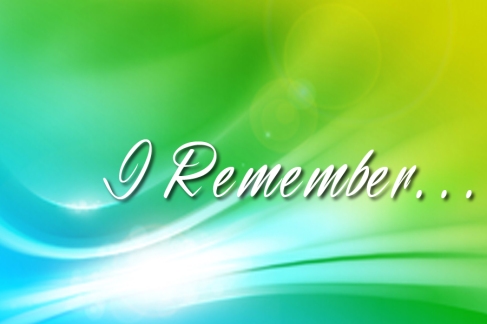 I remember standing in the kitchen washing dishes, fed up with the friends I had in my life at that time. I said out loud to God. I want one BFF. He said I’m your BFF… I said I know, but I’m talking about “down here”. Still years later, I felt as if I hurt his feelings, in my 40’s I’m declaring, he’s all I WANT AND EVER NEED. NO NEW FRIENDS!!!! LOL
I remember one night I was mad at my friend who lived downstairs from me because I found out she was sleeping with my daughters dad. So I called over my friends and we had a party!! We made all kinds of loud noises, turned up music, just to get a reaction from her. Well, she end up calling the POLICE on us, but when they knocked on the door. I KNEW THEM BOTH ( their friend was my EX boyfriend a POLICE OFFICER)… and they end up staying over with us. The gurl downstairs was MADDDDDDDDD 🙂
I remember one night, I had been drinking so much, that when I woke up that morning, my LANDLORD was standing over me. I was so drunk that I left my door unlocked he walked in wondering what happened. That changed my life and caused me to be more conscience of how I handle my drinking. I DONT DRINK TO THIS DAY.
I remember when my neighbor who was always borrowing….. knocked on my door and asked for sugar. I told him No, I didn’t have any, Nesha * my daughter* came out of nowhere and said “ma, yes we do its in the cabinet”… I remember staring at her for at least 5 minutes. LOL She never did that again.
I remember the time when me, my sisters and friend went to the movies, it was real dark, but I had to use the bathroom. As I came back, instead of me entering the row to get to my seat with my face facing the people, I entered with my behind facing their face. I made a mistake and stepped on the lady’s toes. She grabbed my waist because my behind was in her face, she opened her mouth to let out a scream but she couldn’t because it hurt so bad. LOL It takes me friend Gloria to talk about that, and to make the facial expression she made.LOL LOL I felt so bad, her and her husband got up and never came back. LOL
I remember I was working at a drug store. I started getting addicted to the MICHIGAN STATE LOTTERY scratch off tickets. I would go in to work everyday NOT PAY for the tickets, and start scratching them off. When I won, I would use that ticket to pay back all the tickets I scratched off. It wasn’t about money for me, I simply got addicted to the scratching. Took me a long time to stop, but in the process I got others addicted, they got caught and FIRED.
I remember loving several men in my life… but I truly LOVED Darrell.
I remember when we use to go to restaurants and we wanted extra on our food. We would get so irritated when they said “its going to be more money is that okay”? We knew extra cost…. MORE MONEY. We didn’t care we just wanted it!!! So one day, we went to get some barbeque, and my friend Gloria told the young man, she wanted extra sauce. He said okay its going to be extra… irritated to the max, she looked at him and said “okay, well give me $4.00 worth”! I was hollering laughing, he kept trying to get her attention to see if she was serious, but she never turned around. He kept looking to me to help him out, because he didn’t know how to measure $4.00 worth of sauce, and was scared he was going to misjudge it, but all I said was…. ” just give it to her”. Whenever we went back, he automatically gave us extra. LOL
I remember me and Gloria * my ride or die* was eating at Big Boys, we were talking having a good time . This older white man was sitting alone behind her. As we were laughing and talking, she heard him say ” Oh shut up and go back where you came from”. I didn’t hear him, but her facial expression changed, so I said “what’s wrong”? She said did you hear the man behind me. I said no, what he say? As she was telling me, he was looking right at me. He started saying any and everything you can think of that was racist. Before I knew it I started nutting up. I never got up, I just started going off, turning into a FULL BLOWN INCREDIBLE HULK!!. So after a while it was over. As we were paying for our food, the Police came in. We both looked around like “dang what happened in here”. What we missed, we were sitting down, we didn’t see anything”. So, we stood around waiting, TOTALLY FORGETTING ABOUT THE BRUSH WITH THE MAN EARLIER. We realized the manager was trying to stall us, Gloria saw him tilt his head to the police as if to say… these are the ladies right here. Just then the POLICE asked us… “what’s going on”. We like huh? Then we figured out that the manager called the POLICE on us. We were so mad and outdone. After we told them what happened, they were like okay….. have a good day ma’am. We TERRORIZED that manager * with eye contact* every time we went in there. LOL
Where works of the flesh exists, there is NO joy