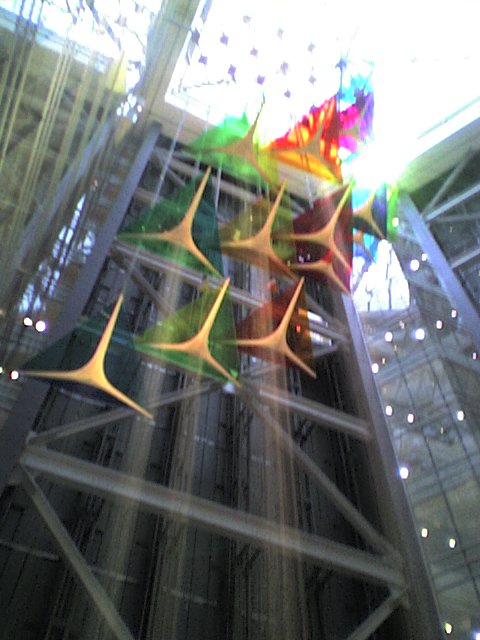 Lately I have been having something on my mind and I just can’t shake it. I don’t know why God keeps laying this on my heart, but after a long nap, which will have me up all night, I feel that I have to share this with you all. For those who were on my yahoo 360 page, I posted this sometime ago, for some reason I can’t find it. So I decided to post it here for you all. I had this dream one night, that me and my daughter was about to cross this big big big big street. It looked like one of the streets here in Detroit, but it wasn’t. As we were walking down the block, to get to this big street. All of sudden it started getting dark, I mean real dark. The skies were turning black, and it started raining and storming. As I looked up at the sky, I knew something was happening that wasn’t normal. I thought about what God said would happen in the last days, and that the sky was going to crack. Me and Neisha knew right away what time it was. People were driving their cars in this big street wondering what was going on, asking each other questions. Some people knew what time it was, but a lot of them didn’t. I heard God say grab Neisha’s hand and run across the street, the world is at the end. I had taught her about God while she was growing up, and so she had already known about this time coming. I grabbed her hand and we ran across the street to this underground tent or something. When we got there, people were there asking each other “whats going on” what happened. So, for some reason God told me to be in charge. . He said tell them to “Wake up and they will be saved. So I told them what he said. At that point in the dream. I KNEW that I WAS DREAMING. He said to tell them to wake up, and he said those that would wake up, a bubble will pop over their heads, and that mean they were saved. I was telling them what God had said, and I was going to make sure that people were popping out Where ever they were standing around listening to me, that’s where the bubble burst over their heads. So after people were popping out, I told Neisha, I said pop out before me, so that I can know you are saved. So she popped out. After time was passing, I went on and popped out. Which woke me up out of my dream. So, I woke up in the middle of the night. EYES WAS THIS BIG QQ!!! I kid you not!!. I walked around my house, thinking what in the world just jump off in my dream Lord!!! It was so real, that I couldn’t stop pacing the floor. My living room was pitched dark, and here I am thinking about this dream. All of a sudden I said God, I got to go back in there and see what happened to those other people. I knew Neisha had popped out, but I needed to see what happened to those other people. So, I said God please, please let me go back into this dream to check on these other people. So I laid back down on the couch and guess what? God let me go back into the dream .

When I got there, I saw people looking funny, standing in their same spots. So, I said what happened? I told yall to pop out, because that’s the only way yall are going to be saved. They looked at me with this look of horror and said……………….. WE CANT WAKE UP.

I felt bad, but I had to go. My baby and loved ones was waiting on me. I said to them. WELL I’M OUT! And that’s when I woke up. Ever since I was younger, I always had this thing of being left behind. I didn’t understand it then, but I do know as to how it defines who I am today. If my mom said: “I need for you to be dressed and at the door by 5pm”. All of a sudden this feeling of “Can’t get left” would come over me. I have had this feeling all my life. To get left and to even think about getting left behind, gives me the creeps. If I have to stay up all day and all night not to miss a deadline. I will. And to this day, when I think/want to do something not pleasing to God. I go back to that and ask myself is doing the wrong you want to do is worth “Getting left”. And the answer is NO!!! LOL In my mind cant nothing top “getting left”.